Lion Census 2020 in Gujarat has got a shot in the arm as around 8,000-10,000 cameras would be used to count the burgeoning population of big cats in the last abode of Asiatic lions. 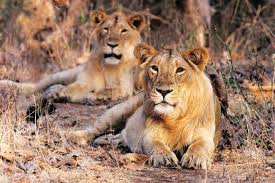 For the first time, expertise of Wildlife Institute of India (WII) will be utilized in the census scheduled to be held in May next year.

Scientist at WII and lion expert, said. "The WII has sent a proposal to government of Gujarat and two rounds of meetings have taken place for finalizing the modalities of lion census."

The 2015 census had pegged the lion numbers at 523 in Gujarat. This number is expected to have grown phenomenally with internal assessments of the forest department hinting population may have crossed the 1,000-mark.

8-10K cameras will catch lions
The census area will be divided into a three-km grid each. Officials said that first field officers will carry out human surveillance wherein scat, hair, teeth, nails of the big cat will be collected.

Physical forms will also be filled out noting description of the lions. This time, only 1,500-2,000 personnel will be out in the field. Unlike last census, 1,500 volunteers used will not be deployed. "In the second phase, 8,000-10,000 camera traps will be installed," said a senior official.